19 Sports Idioms You Need To Know For Work

Whether you're sporty or not, sports idioms are extremely common in the business world. Here are some of the most common ones. Check out the meanings and examples and start using them both at work and in your everyday life and download our free guide with 70+ idioms you need to know for work.

1) Let's get the ball rolling!

Meaning: A new idea or event that makes a significant change in the way things are done.

Meaning: To be aware and quick to take action.

4) To know the score

Meaning: To understand and accept the reality of the situation, or to know the facts.

5) To get a kick out of something

Meaning: To get a feeling of enjoyment, amusement or excitement from something.

Meaning: To choose one person or party whom you support, defend or agree with in an argument.

7) To watch from the sidelines

Meaning: To be in a position where you are not directly involved.

Meaning: Something that you do that gives you disadvantage and helps someone else.

9) To move the goalposts

Meaning: To unfairly change the rules or conditions of a procedure during its course.

Meaning: At this point, or at a certain point in a process.

Meaning: A completely different situation, often one that is difficult or that you know little about.

Meaning: To quit in defeat.

Sport: Boxing, where a fighter indicates surrender by throwing a towel into the ring.

Meaning: It’s your turn to make a decision or do something.

Meaning: To make the decisions.

Meaning: An attempt or guess with very small chance of succeeding or being accurate.

Meaning: The person that is leading in a race or other competition and is expected to win.

Meaning: To do or say something that is unfair or cruel.

19) Out of someone's league

Meaning: Someone or something is too good or expensive for someone to have.

Are we missing any? Tell us in the comments.

At this stage of the game, we know the score - it's easier to just watch from the sidelines and do nothing, but seriously, we always get a kick out of seeing your comments and likes on LinkedIn, so get the ball rolling and pay us a visit!

Take your professional English communication skills to the next level with Talaera. Join one of our free webinars and read more about our English programs, for you or for your teams. 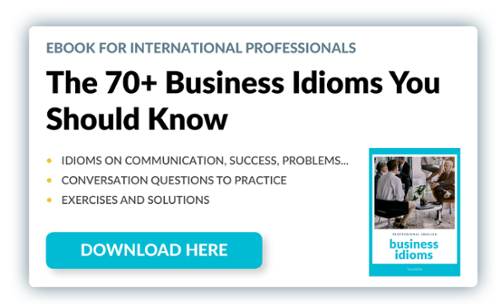 For any additional information or questions, reach out at hello@talaera.com. Interested in getting the best offers and receiving free content on Business English communication for you and your teams? Subscribe to our newsletter!